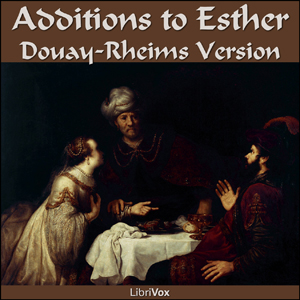 LibriVox recording of Additions to Esther, from the Douay-Rheims Version. Read by Sam Stinson. An additional six chapters appear interspersed in Esther in the Septuagint, the Greek translation, which then was noted by Jerome in compiling the Latin Vulgate; additionally, the Greek text contains many small changes in the meaning of the main text. The extra chapters include several prayers to God, perhaps because it was felt that the above-mentioned lack of mention of God was inappropriate in a holy book. Jerome recognized them as additions not present in the Hebrew Text and placed them at the end of his Latin translation as chapters 10:4-16:24. However, some modern Catholic English Bibles restore the Septuagint order, such as Esther in the NAB. (Summary by Wikipedia) For further information, including links to online text, reader information, RSS feeds, CD cover or other formats (if available), please go to the LibriVox catalog page for this recording. For more free audio books or to become a volunteer reader, visit LibriVox.org. Download M4B (7MB)